Click this text to start editing. This multi-element block is great for showcasing a particular feature or aspect of your business. It could be a signature product, a picture of your entire staff, an image or your physical location, etc. Double click the image to customize it, edit the text, and choose a call-to-action for you button - what do you want people to do now?

Elusive Quality is one of those very few

form as a racehorse and became even

more successful as a stallion - he is

a proven sire of sires.

From an incredible family

Canda comes from one of the most

Miesque, Kingmambo, East of the 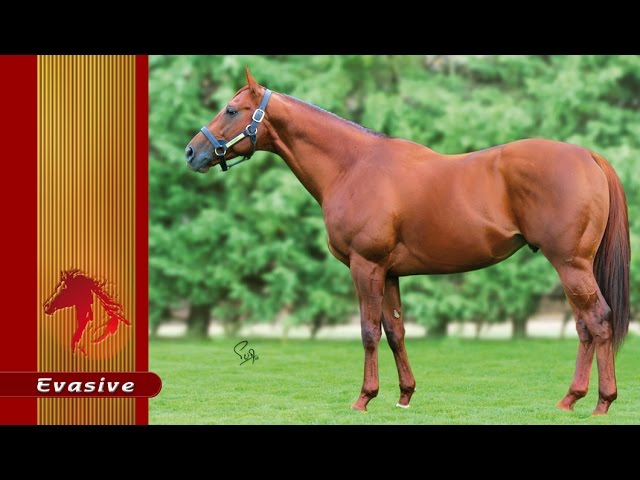 ELUSIVE QUALITY is one of those very few thoroughbreds who produced high class form as a racehorse and became even more successful as a stallion - he is a proven sire of sires. Four of Elusive Quality's sons became outstanding champions and leading stallions:

Quality Road is a sire of top class runners on dirt and turf. He is standing at Lane's End, Versailles, Kentucky.

CANDA comes from one of the most successful families in the history of thoroughbred horseracing. She is related to top class racing and breeding performers Miesque, Kingmambo, East of the Moon, Karakontie, Miesque's Son and Massaraat. Canda is also the dam of Autocratic (Dubawi), who won the Brigadier Gerard Stakes (G3) over 10 furlongs at Sandown Park for the same connections as Evasive, Cheveley Park Stud / Sir Michael Stoute.

Canda was sold for $2.4 million at the Keeneland Sales in Lexington when carrying Evasive. Evasive was himself sold for an undisclosed sum to Godolphin after excellent runs in the 2,000 Guineas (G1) at Newmarket and St. James's Palace Stakes (G1) at Royal Ascot.

This is very much a 'live' family and good horses just keep on coming from Evasive's distaff side year in year out.

Evasive's dam Canda is a daughter of legendary Storm Cat, who is also broodmare sire of Breeders' Cup Sprint / Eclipse Award champion and highly successful stallion Speightstown. Speightstown, who has sired G1 winners on dirt and turf in the USA, Europe and Dubai,  is a son of Gone West. Evasive is a grandson of Gone West.

Evasive's broodmare sire Storm Cat - 'as good as it gets'

at Aqueduct, as a two-year-old. He became one of the best thoroughbred stallions in North America.

Considering Evasive as the right stallion for your mare?

It's probably an excellent choice. Note that his famous broodmare sire,

Storm Cat, became the sire of dams of 50 stakes winners, most notably

EVASIVE AND SPEIGHTSTOWN WERE BRED ALONG THE SAME LINES